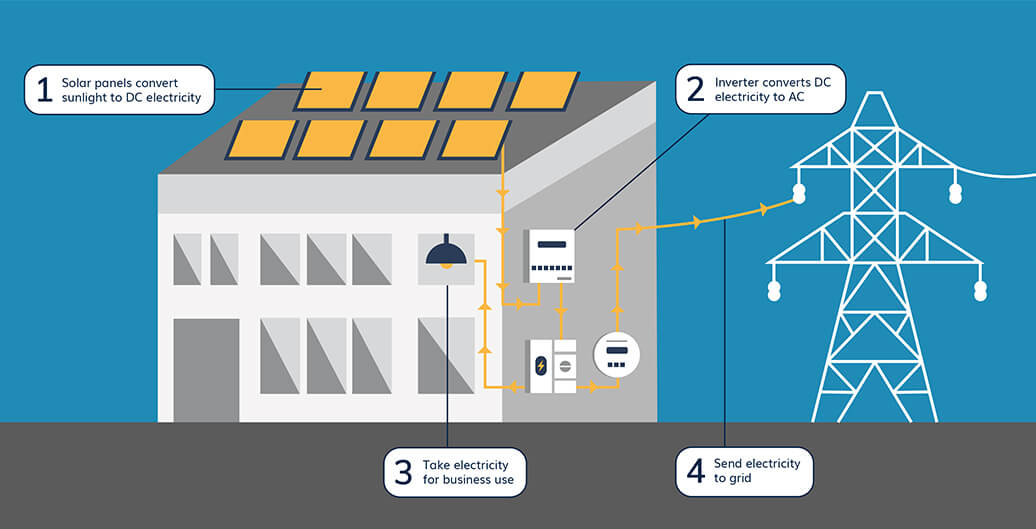 - Helps you use more of the
electricity you generate
- Could enable you to take
advantage of night-time
charging - cheap-rate electricity
- Require little maintenance:
‘Fit and forget’

What is solar panel battery storage?

An energy-storage system lets you capture electricity so you can use it at another time. For example, you can store the electricity your solar panels generate during the day and use it at night. Big tech brands including Tesla sell home-energy storage systems. Installing a battery alongside solar panels means you can store excess electricity generated, or charge your electric vehicle. You can also sign up for economy 7 tariffs that charge from the grid when electricity is cheaper and less carbon-intensive, and discharges it to run appliances when electricity is pricier and more carbon-intensive later.

There are two types of battery installation: DC and AC systems.

DC battery systems A DC system is connected directly to the generation source (eg solar panels), before the electricity generation meter. You won’t need another inverter, which is more efficient, but charging and discharging is less efficient, so could affect your FIT (this isn’t usually recommended if you’re retrofitting a battery to an existing PV system). DC systems can’t be charged from the grid.

AC battery systems These are connected after the electricity generation meter. So you’ll need an AC-to-DC power unit to convert the electricity you generate into AC you can use in your home (and then back again to store it in your battery). AC systems are more expensive but an AC system won’t affect your FITs payments, as the generation meter can register the total system output.

What is depth of discharge and why is it important?

The term ‘depth of discharge’ is fairly self-explanatory – it describes the degree to which a battery is emptied relative to its total capacity. If you have a battery bank with a nominal capacity of 10 kilowatt-hour (kWh), at
70% DoD, for example, that battery bank has 3kWh of charge remaining.

Most battery chemistries (including lead-acid and lithium-ion) degrade as they are charged and discharged, gradually reducing their ability to store energy. This affects the length of the battery’s operational life, as well
as the total number of kilowatt-hours it will be able tostore over that lifetime.

Two of the most critical factors in battery degradation are: a) the number of dischargerecharge cycles, and b) the maximum depth to which they are discharged. If a lead-acid battery is discharged 100% every time it is used, for example, its electrolyte will quickly degrade compared to if it were only discharged to a maximum of 50%.

It is for this reason that the term ‘cycle life’ (with the qualifier ‘at X DoD’) is used on battery specification sheets.
This specification may appear once (if there is only one recommended DoD level) or multiple times (if the manufacturer would like to show examples of different use cases). For example, a battery bank may have 10,000 cycles at 20% DoD but only 1,000 cycles at 80% DoD.